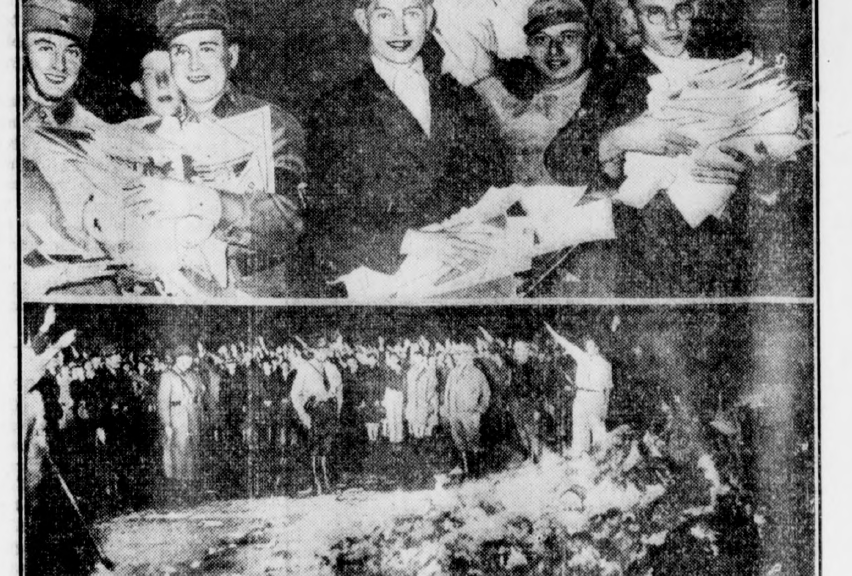 We are continuing to examine world events through the eyes of the Hoosier newspaper reader.  Because many of these articles were reported through the Associated Press and United Press news services, what we are really seeing is not just what Hoosiers knew, but what the average American knew, about the events leading up to the Holocaust.

Over the next several months, we will be contributing newspaper articles to the United States Holocaust Memorial Museum‘s project titled History Unfolded: US Newspapers and the Holocaust.  Using digitized newspapers mainly accessible via Hoosier State Chronicles, we are looking at key events suggested for research by the museum to see what Hoosiers knew when. The overall goal of the project is to contribute to the scholarship on how American media reported and under-reported Nazi atrocities.  Anyone can submit their research; find out how at History Unfolded.

For this post, Part 3 of our History Unfolded project, we examine Indiana newspapers to find out when and what Hoosiers learned about the book burnings staged by German students and Nazi officials. In our previous post, we looked at articles reporting the removal of Jewish leaders from government and institutional positions by the Nazi Party in March and April of 1933.  By this time, Nazi authorities were also working to remove Jews from cultural organizations and to “synchronize” the goals of these organizations with that of the Nazi Party.  According to the United States Holocaust Memorial Museum (USHMM):

In 1933, Nazi German authorities aimed to synchronize professional and cultural organizations with Nazi ideology and policy (Gleichschaltung). Joseph Goebbels, Nazi Minister for Popular Enlightenment and Propaganda, began an effort to bring German arts and culture in line with Nazi goals. The government purged cultural organizations of Jewish and other officials alleged to be politically suspect or who performed or created art works which Nazi ideologues labeled “degenerate.”

By 1933, Goebbels had coordinated with the influential National Socialist German Student’s Association to “synchronize” German literature.  According to the USHMM, “German university students were among the vanguard of the early Nazi movement.” This younger generation was resentful of what they saw as the humiliation of Germany through disarmament and sanctions imposed at the end of World War One. They saw National Socialism as an outlet for their anger and feelings of nationalism and antisemitism.  An article published in the (Greencastle) Daily Banner on January 17, 1933, gives some insight into the students’ hostility.  In this article, United Press Staff Correspondent Richard D. McMillan reported the sentiments of one German student:

We did not make the last war.  Even if it is accepted that Germany was guilty for plunging the world into the greatest carnage of all time — and we dispute this question of war guilt — we, the younger generation, were not responsible. Why, then, should we suffer the humiliation and indignity of our present situation.

This generation, however, would be responsible for much greater carnage. On April 6, 1933, the student association’s propaganda office declared a nation-wide purge of “un-German” literature. Local chapters of the Nazi German Student Association published articles and lists of blacklisted works, created press releases and radio announcements, and organized book burning events with Nazi speakers.

Black listed authors included socialists, communists, and “corrupting foreign influences.”  They condemned several American writers including Ernest Hemingway, Jack London, and Indiana author Theodore Dreiser. A Terre Haute native, Dreiser was targeted because of his socialist convictions and because of his role in defending political radicals, many of whom were union leaders that he believed were denied social justice. Interestingly, Dreiser’s books were also ordered to be burned for their socialist content in 1935 by the library trustees of Warsaw, Indiana, where he went to high school.

Considering the action of burning books runs counter to American ideas about freedom of the press and speech, we expected to see strong denunciations of the purge in Indiana newspapers.  In actuality, we found little.  Unfortunately, the (Indianapolis) Jewish Post is not available for most of the year 1933 in Hoosier State Chronicles.  On the other hand, most Indiana residents would not have had access to that newspaper.  So what did the average Hoosier newspaper reader know about the Nazi-orchestrated book burnings?

By searching the (Greencastle) Daily Banner we can see that Indiana readers had at least some knowledge of Nazi attempts to align their values with that of various institutions. (See Part 2 for information of removal of Jews from various positions of leadership as well as from universities.)  On May 2, 1933, the Daily Banner ran a United Press (UP) article reporting that Nazi storm troops had seized all German trade unions.  The article stated that Nazis “arrested the upper officials of each union and assumed charge” and “announced labor was being ‘harmonized’ with the Nazi regime.”

On May 10, the day of the scheduled event,  several Indiana newspapers picked up the story via the Associated Press (AP).  The (Columbus) Republic, the (Richmond) Palladium-Item, and the Muncie Evening Press were among the newspapers that ran the same article announcing the burning of books for the sake of saving “kultur,” a Nazi term referring to native, superior German culture. The AP article reported:

Blacklisted books from private as well as public libraries were piled high today on ‘Kultur’s altars’ throughout Germany for public burning tonight. Schoolboys enthusiastically rushed final preparations for the huge bonfires. Nazi student committees of action have been working at top speed more than a week arranging for the great purging of the libraries of ‘un-German influences.’ Government recognition is to be lent to the occasion in a rallying speech shortly before midnight by Dr. Joseph Goebbels, Nazi minister of public enlightenment.

(You can watch footage courtesy of the National Archives of Goebbels speaking to students at Openplatz in Berlin as books burn in front of the Nazi flag.)

The AP article reported that 20,000 books had been piled up in Berlin to be lit on fire at 11:00 that night. The article stated that “All books of a socialistic, Jewish or pacifist trend are especially marked for destruction.” In place of the blacklisted books the students would reportedly be reading Alfred Rosenburg, a Nazi ideologue who penned some of the central dogma of the party, and the Nazi newspaper, the Völkischer Beobachter.  Some works, however, were mandatory.  The article continued: “Among books compulsorily introduced is Chancellor Hitler’s ‘Mein Kampf’ . . . There must be two to ten copies in each library.”

On May 11, descriptions of the book burning appeared in several Indiana newspapers.  The (Muncie) Star Press ran an AP article reporting from Berlin:

The AP article continued to describe the scene:

The weird glow illuminated Opera Square opposite Berlin University as the students, garbed in the picturesque costumes of their fraternities, the Nazi brown or the steel helmet gray, threw a thousand torches on the pyre, then seized the books from trucks and hurled them onto the blaze amid cheers.

The (Greencastle) Daily Banner ran a similar article from the United Press, describing the event in Berlin.  The UP reported:

Ten thousand singing and shouting students marched around a blazing bonfire in Opera square until the early hours of today, jubilant at destroying books representing ideas and doctrines considered hostile to Nazi Germany.

The UP reported that in addition to books by the authors previously mentioned, the students destroyed All Quiet On The Western Front, a work describing the horrors of the First World War, from which the students were distancing themselves.

In the days following the purge, we expected to find editorials condemning the book burning and exalting the American principles of free speech and press. As previously mentioned, our search suffers from lack of access the (Indianapolis) Jewish Post for these dates.  However, we were hoping to find a strong statement such as the editorial by the African American newspaper the Indianapolis Recorder condemning the boycott covered in our previous post in this series. However, we found little local response to the event.

On May 17, the Indianapolis Star ran an editorial originally published by the Baltimore Sun titled, “Book Burning an Evidence of German Nazi Stupidity.” The writer asserted that this event was part of a long history of book burnings by “underlings” of authoritarian governments who have been convinced to hate what they cannot understand. The editorial stated: “German education . . . must subordinate scholarship to a mass of ill-digested preconceptions about Nordics, ‘blond men’ and ‘heroic steely romance.'” By eradicating all writings that challenge party doctrine and erasing historical context, governments have been able to manipulate and influence their followers.  In Nazi Germany, this had devastating consequences. The editorial ended by predicting that someday volumes of works would be written about the “Influences of the Blond Nordic Myth on the Revolt of the Illiterate.”

On May 22, the (Greencastle) Daily Banner ran a group of photographs and a caption almost certainly from a wire service (though none is credited) showing images from the book burning. The headline, “Scene at Nazis’ Literary Holocaust,” seems chillingly prescient of the genocide to come.

Made in Berlin during the recent Nazi drive on what they considered anti-German literature, these pictures show the destruction of more than 20,000 books and pamphlets adjudged inimical to culture as interpreted by Chancellor Adolf Hitler and his followers. Upper photo shows cheering Nazis hailing Hitler as the books went up in smoke, while in lower panel are young Nazis feeding the literary Holocaust.

While the articles stopped appearing in Indiana newspapers, the book burnings continued. Nazis burned books in thirty-four university towns across Germany.  There were more burnings over the following days and another wave on June 21. The Berlin event was broadcasted throughout the country.  According to William L Shirer’s The Rise and Fall of Third Reich, Joseph Goebbels had “put German culture into a Nazi straight jacket” (page 241). The night of May 10, 1933, Goebbels stated, “These flames not only illuminate the final end of an old era; they light up the new.”

Despite Goebbel’s assertions, the “new” era only grew darker. As German Jewish poet Heinrich Heine wrote in an 1821 play which was among the works burned that night, ” Where they burn books, they will also ultimately burn people.” According to the USHMM, the oppression of culture was just one of many ways in which the Nazis worked to “purify” Germany.  The annihilation of the Jewish people would be next.

Please visit the United States Holocaust Memorial Museum’s summary of the book burnings for more information, photographs, and the personal stories of Holocaust survivors. Don’t forget that you can also participate in the History Unfolded project. Hoosiers can also learn more about the Holocaust and its survivors through CANDLES Holocaust Museum and Education Center in Terre Haute, Indiana.

Check back over the next few weeks as we share our research into Indiana newspaper coverage of the Nuremberg Race Laws, the annexation of Austria, and the struggle of Jewish refugees.