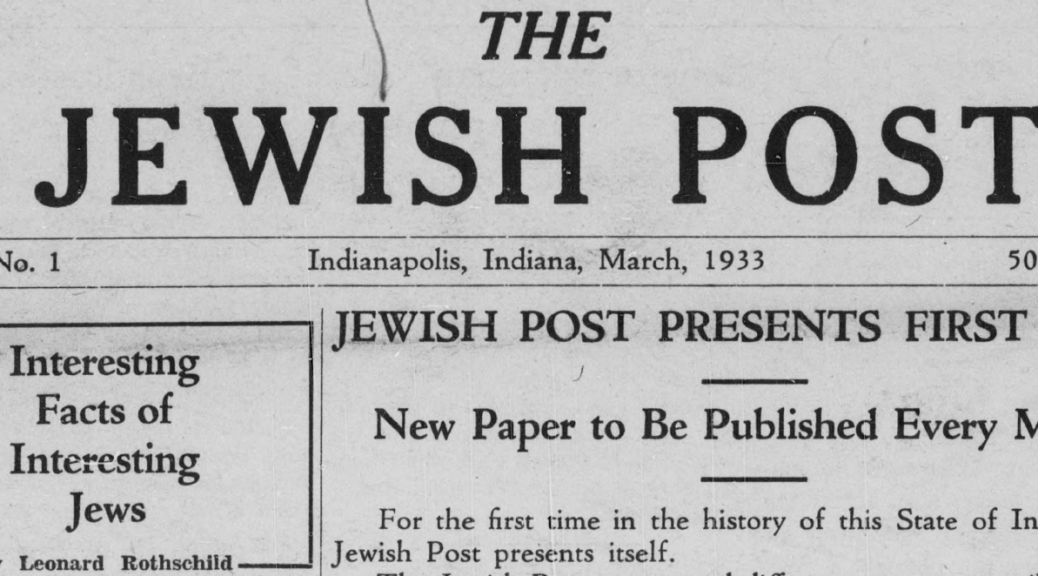 In this series of posts, we will be looking at world events through the eyes of the Hoosier newspaper reader.  Because many of these articles were reported through the Associated Press and United Press news services, what we are really seeing is not just what Hoosiers knew, but what the average American knew, about the events leading up to the Holocaust.

Over the next several months, we will be contributing newspaper articles to the United States Holocaust Memorial Museum‘s project titled History Unfolded: US Newspapers and the Holocaust.  Using digitized newspapers accessible via Hoosier State Chronicles, especially the (Indianapolis) Jewish Post, we are looking at key events suggested for research by the museum to see what Hoosiers knew when. The overall goal of the project is to contribute to the scholarship on how American media reported and under-reported Nazi atrocities.  Anyone can submit their research; find out how at History Unfolded.

We began with the first suggested topic: the opening of Dachau.

The first Nazi concentration camp, opened at Dachau March 22, 1933. According to History Unfolded, the facility at Dachau was located just north of Munich in an old munition factory. It was first established to hold political prisoners of the Nazis. Within one year, it held about 4,800, mainly political prisoners and by the end of the war, that number would exceed 188,000. Over 28,000 prisoners, many of them Jews, would lose their lives there.

Just a few days after the opening of Dachau, on March 27, 1933, the famous activist rabbi Stephen Wise organized a large protest in New York City against Nazi treatment of Jews, labor leaders, and those with opposing political views. Many American newspapers reported on the camp’s opening and Wise’s protest.  For example, on April 5, 1933, a New York Times headline read “Nazis to Hold 5,000 in Camp at Dachau; 300 Communist Prisoners Are Preparing Building of Old Munitions Plant; Secrecy Shrouds Work.” However, this important article was buried on page ten.  So, while there was some mention of Dachau, it was perhaps not clear to the average reader what was occurring there. We searched Hoosier State Chronicles to find out specifically: When did Hoosiers hear about Dachau?

Our HSC search covered four newspapers: the Greencastle Daily Banner, the Muncie Post-Democrat, and limited issues of the Jewish Post and Indianapolis Recorder. The first issue of the Indianapolis paper, the Jewish Post, appeared in March 1933, the same month that Dachau opened.* The only mention of the rise of the Nazi regime in the first issue was a short article about the arrest of Jewish merchants in Annaberg, Germany by Nazi Storm Troopers. (We will look further into this in the next post).

We were so surprised by the lack of articles on Dachau in 1933 that we decided to look at Indiana newspapers in the Newspapers.com collection as well.  There was only one. The Logansport Pharos-Tribune published a United Press article on April 13, 1933.  The article reported: “Three communists seeking to escape from a concentration camp for political prisoners at Dachau, Bavaria, were shot and killed…” The next article available in Newspapers.com mentioning Dachau appeared over a year later. On July 20, 1934, the (Seymour) Tribune and the Rushville Republican ran an Associated Press article reporting on “rumors of further wholesale murders spread through Germany today” and accompanying “cool denials from Nazi leaders.” The article stated that “among the reports was one . . . that prisoners at the Dachau concentration camp were murdered” though “no verification could be made.” The Tipton Daily Tribune ran a similar article on the same day reporting on “allegations” that “prisoners and guards at Dachau concentration camp had been killed off.”

No more articles available through Hoosier State Chronicles mentioned Dachau until December 28, 1934, when the Greencastle Daily Banner reported on fighting between German and Austrian Nazis at Munich.  A small riot broke out that resulted in the summoning of SS Troops from Dachau. Additionally, the Banner misspelled the name of the camp as “Bachau,” suggesting that the average Hoosier still heard very little about the Dachau camp at this time.**

A more general search of the Jewish Post for only the word “camp” as opposed to “Dachau” revealed the first mention of a German Jew being sent to a concentration camp on May 25, 1934.  The Post reported that in Berlin:

“the first arrest in a new campaign against ‘faultfinders’, preferably Jews, was made when a Jewish employee of a large bank was sent to a concentration camp on a charge of slandering Dr. Paul Joseph Goebbels, Nazi minister of Propaganda.  He is Dr. Jacob Wasserman, 34, a native of Latvia.”

The next mention of a concentration camp appears in a short announcement in the Jewish Post on July 20, 1934. The Post reported that German-Jewish actress Elizabeth Bergner, who had escaped to England, “was threatened with three years internment in a concentration camp if she returns to Germany.”

The first mention of Dachau as a concentration camp in one of these Indiana newspapers did not occur until October 14, 1938, five years into its operation.  The Greencastle Daily Banner ran a report from Vienna on Nazi persecution of Czech Jews and prominent Catholics.  At a Nazi demonstration outside the palace of Cardinal Innitzer, archbishop of Vienna, signs read, “Jews and Priests are Enemies of the German People,” and the demonstrators carried a mock gallows and chanted “To Dachau!” in reference to the cardinal.

By the time Hoosiers read this October 1938 article in the Greencastle newspaper, Dachau had become a large complex of multiple buildings through the forced labor of its prisoners. By November 1938, over 10,000 Jews were imprisoned at Dachau after the Kristallnacht or Night of the Broken glass.

There are too many tragedies at Dachau and its sub-camps to address here. Upon liberation, thousands had died from disease, forced labor, execution by firing squad and hanging, death marches, medical experimentation, and transportation to killing centers.

On April 30, 1945, Hoosier subscribers to the Greencastle Daily Banner read:

“The notorious Dachau concentration camp seven miles north of Munich — the first and blackest of the political death camps established in the early days of the Hitler regime — was over-run by the Seventh army yesterday. There the Yanks killed or captured 300 SS guards and liberated 32,000 political and religious prisoners who greeted their rescuers with hysterical joy. For hundred and perhaps thousands of Dachau’s other inmates the Americans came too late. Fifty boxcars were found on a nearby railroad siding, loaded with bodies, torture chambers, gas boxes, tnd [sic] other paraphernalia of terror that the Nazi guards were attempting to remove.”

According to the United States Holocaust Memorial Museum:

Please visit the United States Holocaust Memorial Museum’s summary of Dachau for more information, photographs, and the personal stories of survivors. Hoosiers can learn more about the Holocaust and its survivors through CANDLES Holocaust Museum and Education Center in Terre Haute, Indiana.

*Unfortunately the March 1933 issue of the Jewish Post is the only issue available on Hoosier State Chronicles for that year. Starting in February 1934, HSC has almost every issue, and thus this newspaper will be used more in later posts.

**There was a Bachau (or Bad Bachau) in Germany but it was over 200 km away from Munich while Dachau was about 30 km away, suggesting that the spelling of “Bachau” was indeed a misprint.