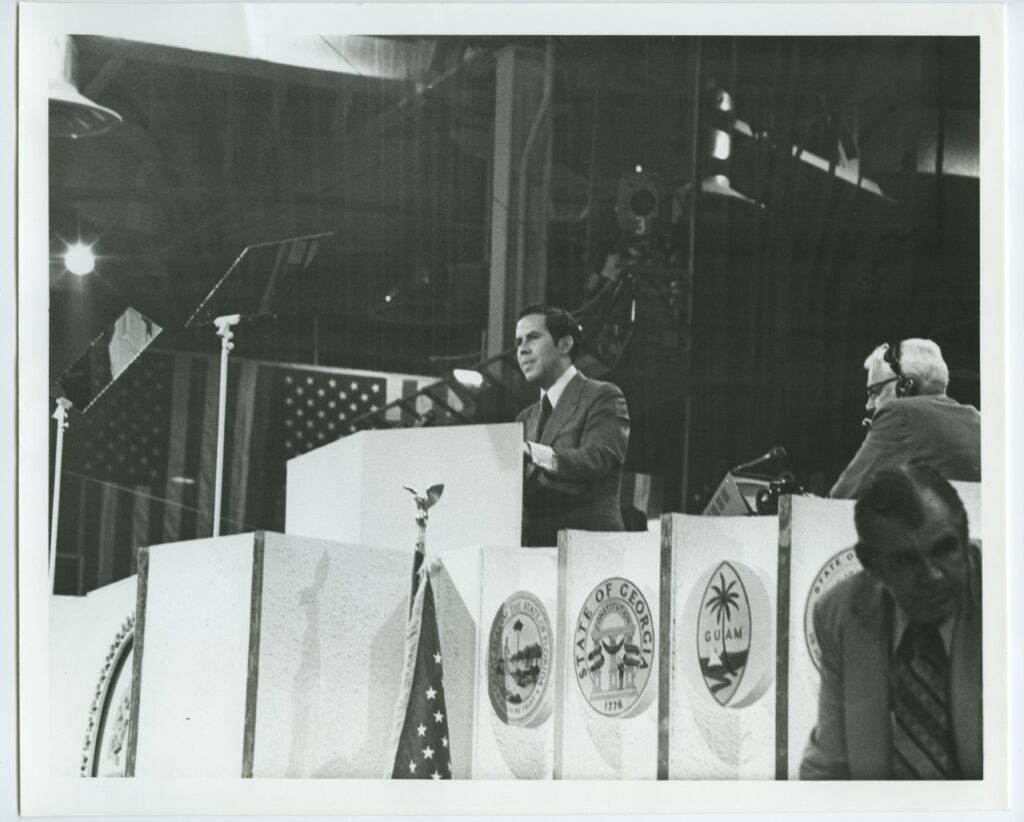 “A warm Hoosier welcome on a rather cold day.”

That’s how President Richard Nixon described his reception in Indianapolis on February 5th, 1970. Awaiting his arrival on the tarmac, Governor Edgar Whitcomb and Mayor Richard Lugar received the President and his federal entourage. This was the first presidential visit conducted by Nixon since his inauguration in 1969 and Indianapolis was chosen as their destination due to the new Republican leadership under Mayor Lugar. After exchanging pleasantries and traveling to City Hall, Nixon and Lugar spoke to the crowd of approximately 1,000 Hoosiers before convening for their scheduled conference on urban affairs. During the conference, President Nixon convened with nine Indiana mayors to discuss problems faced by city leadership and the federal government’s role. At 4:30 PM, President Nixon departed Indianapolis to visit Chicago. While brief, President Nixon’s visit to Indianapolis greatly influenced both Lugar’s political future and the city of Indianapolis as a whole.

After Nixon’s visit, Richard Lugar would experience a meteoric rise in the political sphere, easily winning his mayoral re-election in 1972 and earning a U.S. Senate seat in 1976. Lugar served one of Indiana’s senators for 32 years, garnering a reputation as a foreign policy expert and renowned statesman. He is best known for co-authoring the acclaimed Nunn-Lugar Cooperative Threat Reduction program, which led to the dismantling of thousands of Cold-War era weapons in previous USSR territory and a Nobel Peace Prize Nomination. In 2013, President Barack Obama named Lugar as a Presidential Medal of Freedom recipient stating:

“His legacy, though, is the thousands of missiles and bombers, and warheads that no longer threaten us because of his extraordinary work. And our nation and our world are safer because of this statesman.” – President Barack Obama, 2013

In examining Lugar’s towering legacy, one must ask, how does a mayor of a landlocked city in the Midwest become the leading statesman in foreign policy for over 30 years?

The answer to that question can be traced back to February 5th, 1970, and a warm handshake on a rather cold day. Lugar transformed an otherwise short and symbolic visit with Nixon into a key political moment, forging an unprecedented relationship between a city mayor and the sitting president. In a Washington Post article, Peter Braestrup aptly dubbed the young Lugar as “Nixon’s Favorite Mayor.” The name stuck, and Lugar leveraged his new title to enter national politics and foreign affairs. While Lugar’s association as “Nixon’s Favorite Mayor” was problematic immediately after the Watergate scandal, his affiliation with the President was overall more beneficial than detrimental to his political career. Ultimately Nixon’s relationship with Lugar was the catalyst for Lugar’s remarkable career in foreign affairs, elevating both Lugar and Indianapolis to national and global prominence.

Nixon’s presidency is remembered, for better or worse, as one of the most consequential administrations in American history. Globally, Nixon found success in foreign affairs, revolutionizing the Cold War by pursuing rapprochement with China. Domestically, Nixon championed New Federalism which facilitated the transfer of power from the federal government to the state level via federal block grants. Conservatives believed this policy would curb the bloated bureaucratic system. However, Democrats believed that New Federalism was an underhanded attempt to dismantle President Lyndon B. Johnson’s Great Society. Frustrated by a resistant Congress, Nixon sought to prove that his philosophy of decentralization worked. In 1970, Nixon found a prime example of New Federalism in Indianapolis, lead by its newly minted Republican mayor, Richard G. Lugar.

Before Lugar’s election, Indianapolis Democrats had enjoyed a sixteen-year long monopoly on the mayoral office. However, Lugar and his campaign manager, Keith Bulen, capitalized on a rift forming within the Democratic party and, running a tight grassroots campaign, won the 1967 mayoral election. As mayor, Lugar successfully implemented Unigov, a controversial piece of legislation that folded several counties into the city of Indianapolis, increasing the city’s population by 300,000 citizens overnight. Notably, the demographic incorporated into Marion County was mainly white, conservative, suburbanites whose vote solidified the Republican party’s dominance in Indianapolis. Unigov also established Indianapolis as a leader in urban policy, successful city consolidation, and effective “home rule,” a not-so-subtle nod to Nixonian New Federalism.

By 1970, President Nixon was embroiled in the Vietnam War and public criticism of his inability to withdraw, a promise he had made on the campaign trail, mounted every day. As the war dragged on, Nixon became increasingly sequestered in the White House, failing to make a presidential visit outside of Washington D.C. for the entirety of 1969. A deeply insecure man, Nixon abhorred the idea of a presidential visit being marred by coverage of anti-war protestors and personally embarrassing him. His administration urged him to leave D.C. and eventually identified Indianapolis as a city where he would receive an enthusiastic welcome and, in turn, positive media coverage. Better yet, Mayor Lugar’s Unigov legislation offered a thriving example of New Federalism and decentralized government. The presidential visit was confirmed in January of 1970 and Mayor Lugar began preparing the local Republican party to receive the president.

The presidential visit was a rousing success with both the media and public. The Indiana GOP had extensively planned this visit, inviting positive coverage of the event and a gathering a crowd of over 1,000 people for Nixon and Lugar’s speeches alone. President Nixon was reportedly delighted by the large reception and in good humor traveling to the conference. The Urban Affairs Conference was more symbolic than practical, cementing Nixon’s commitment to New Federalist Policy. This commitment would later reach Indianapolis by way of generous block grants and federal funding. The visit drew national attention to Lugar’s successes as mayor and the media began connecting Lugar with Nixon in their headlines, eventually bestowing upon Lugar the title of “Nixon’s Favorite Mayor.”

More importantly, Nixon’s visit to Indianapolis unintentionally precipitated Senator Lugar’s career as a diplomat, statesman, and foreign affairs expert. In WYFI’s documentary on Lugar, the senator reminisces on how he was invited to his first NATO conference by President Nixon. After delivering their speeches in front of City Hall, Lugar and Nixon were heading towards the conference on urban affairs and conversing during the elevator ride.

Upon passing the 25th floor, Nixon pivoted towards Lugar and said:

“Dick, I want you to go with Moynihan…to Brussels to represent the United States at a NATO conference on cities.” – President Nixon as remembered by Richard Lugar

Lugar accepted the President’s invitation. Seemingly a reward for the successful presidential visit, Lugar’s attendance Brussels NATO conference precipitated his transformation from a local, Midwestern politician to a U.S. Senator and global tour de force. During the conference, Lugar attended several diplomatic meetings and, on the second day, proposed that Indianapolis host another NATO conference in May of 1971. Talking points for this Hoosier hosted conference included urban growth, with Indianapolis being the case study, municipal affairs, and urban problems. The proposal was accepted, and Lugar was able to successfully blend his previous experience with urban affairs with his new interests in foreign policy. Both NATO conferences provided the mayor with vital connections and foreign policy experience that Lugar later leveraged to maneuver into the U.S. Senate’s Foreign Affairs Committee.

A year after hosting the Indianapolis NATO conference, Mayor Lugar was invited to speak at the 1972 RNC where he was introduced by Governor Ronald Reagan. Reagan, in his charismatic oratory style, lauded Lugar as:

“A respected spokesman for and practitioner of the very best in workable new approaches to the urban challenge… he has represented the President not only across this country but also within the NATO Community.”- President Ronald Reagan, 1972

Lugar’s rise to national prominence experienced a major setback on August 8th, 1974, when Nixon, unable to escape the Watergate Scandal, became the first and only sitting president to resign. Suddenly the title “Nixon’s Favorite Mayor,” was a curse rather than a blessing. Despite efforts to separate himself from the disgraced president, Lugar lost the 1974 Senatorial election to Democratic incumbent Birch Bayh. However, Lugar quickly bounced back in 1976’s election and began his federal career as Indiana’s longest-serving state senator.

Ultimately, the lasting impact of Lugar’s relationship with Nixon as his “favorite mayor” was Lugar’s rapid rise in politics and critical access to foreign policy early in his career. Without Nixon’s 1972 presidential visit, Lugar would not have been able to attend the NATO conference in Brussels, host a similar conference in Indianapolis, and most likely would not have been invited to speak at the 1972 RNC. These cumulative events were significantly more impactful than Lugar’s singular 1974 election loss. Without Nixon’s mentorship, Lugar’s senatorial career would have been vastly different, and his legislation may have been limited to areas more in line with the expertise of a midwestern politician such as agriculture. Instead, Lugar was able to capitalize on the diplomatic opportunities Nixon presented him and pursue an illustrious career in foreign affairs. After losing the primary election in 2012, Lugar would continue to make speaking appearances until his passing on April 28th, 2019. The Lugar Center preserves Senator Lugar’s preeminent legacy by continuing his policies regarding nuclear weapon nonproliferation, global food security, and bipartisan governance.

In January of 1994, during the 25th anniversary of Nixon’s presidential inauguration, Senator Lugar and President Nixon’s paths crossed one final time. It was another chilly day in Washington D.C., and the weather resembled that of the two statesman’s first encounter nearly 25 years prior. In those two and a half decades much had changed: the Cold War had ended, Bill Clinton was President, and the Republican Party was undergoing a major political transformation and becoming increasingly conservative. This stood in stark contrast to Nixon’s promotion of desegregation and the founding of the EPA. It was during this time that the political topography started shifting under Lugar’s feet and Lugar, once known as a solid conservative, began being known as a bipartisan negotiator or even a moderate. This new reputation would later be weaponized against him in the 2012 primary election. Regardless of the political present and future, Lugar and Nixon were gathered to recount presidential history. Lugar proclaimed to the gathered crowd, “Our prayers today are for the continuing strength and activity of President Richard Nixon,” whom he then referred to as his “foreign policy teacher and counselor.” After the celebration, Nixon, who was now in his 80’s, privately pulled Lugar aside and confided in him saying:

“You know, you really were my favorite mayor.”