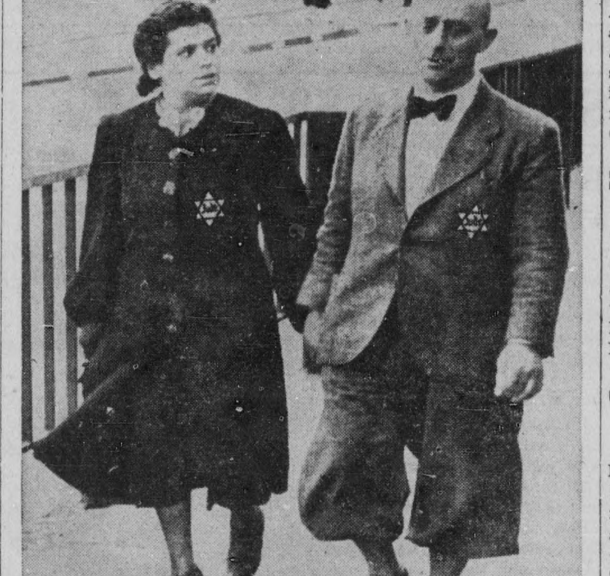 The Holocaust did not start with gas chambers. It started with stereotyping and hateful words, escalated to stigmatization and discrimination, and culminated in genocide, according to the United States Holocaust Memorial Museum (USHMM). Thus the September 1941 order forcing Jews in Germany and occupied territories to wear a yellow star sewn onto their clothes, marked an important shift in the state-sponsored persecution of Jews. The bright yellow star with mock Hebrew lettering clearly identified Jews, marking them for discrimination, violence, and eventually, deportation to concentration camps.

But what did this mean to the average American at the time? The  USHMM is seeking to discover just that through their History Unfolded Project (find out how you can contribute). And at Hoosier State Chronicles, we are using the freely accessible digitized Indiana newspapers to try and determine what Hoosier knew about the Holocaust and how they responded or did not.

In 1939, even before the general order, German authorities in occupied Poland required Jews to wear a blue Star of David sewn on a white armband. By the summer of 1941, Nazis required Jews to wear a yellow star badge in areas of the German-invaded Soviet Union. Indiana newspapers reported widely on the imposition of the badge and the worsening of conditions for Jews in occupied territories.* In July 1941, newspapers published in Munster, Valparaiso, Kokomo, and South Bend, Indiana, ran a lengthy United Press (UP) article by Jack Fleischer, a war correspondent based in Germany, who would later be interred by the Nazis for six months.

Fleischer reported from Krakow, Poland (which he spelled Cracow). He described taking a tour for foreign correspondents given by General Karl Frank, a high-ranking SS officer who would be executed after the war for his leadership in several massacres in Czechoslovakia. Frank showed off his “beautiful 14th century castle headquarters” and boasted of the improvements in the area since the Nazi occupation. According to Frank, “German experts” were “teaching Polish farmers modern agricultural methods” and had conscripted Polish laborers who were at work “repairing streets and public buildings,” as well as dredging a river and building parks.

Fleischer also reported that he “drove through Cracow’s ghetto several times.” Fleischer wrote that Jews could leave the ghetto during the day to work, but were required to return at night. He continued: “They are required to wear white arm bands bearing the star of David.” He learned that the Jewish population of Krakow “which was 70,000 before the occupation, now is 11,000.” Most were transferred to the Warsaw Ghetto. A year later, German police and SS would begin deportations from Warsaw to the Treblinka killing center. The star badge played an important role in such deportations. According to the USHMM:

When Nazi officials implemented the Jewish badge between 1939 and 1945, they did so in an intensified, systematic manner, as a prelude to deporting Jews to ghettos and killing centers in German-occupied eastern Europe.

By September 1941, the badge had been implemented systematically throughout the Greater German Reich. Many Indiana newspapers reported the story. The Kokomo Tribune ran a UP report on September 6 under the headline “Oppression”:

Reinhard Heydrich, head of the Berlin secret police, today ordered all Jews over six years of age to wear the star of David in yellow on their coats together with the inscription “Jew” in black.

The following day, the (Richmond) Palladium-Item ran an International News Service report (INS) and the Indianapolis Star ran an Associate Press (AP) report, both from Berlin, providing more information. These wire services noted that the badge was required to be large, “the size of the palm of their hand,” and worn on the left side. The paper reported that, starting September 19, Jews would not be allowed to leave their districts without police permission. The report concluded by noting that this decree was ordered just days before Rosh Hashanah, a time of introspection for Jews, but also a celebration of the year completed. At any other time, most Jews in Berlin would have been preparing prayers and baking challah.

Also on September 7, the South Bend Tribune ran a more extensive UP article, reiterating most of the information given by the other newspapers and adding more alarming details. This article reported that German authorities had already “banned exit permission from Germany.” The UP reported that the decree was accompanied by severe penalties, large fines and imprisonment, for failure to wear the badge. The writer concluded that the order was “the sharpest official measure against Jews since those introduced following the anti-Semitic outbreaks of November 9, 1938,” referring to Kistallnacht.

The (Indianapolis) Jewish Post ran an editorial by Rabbi Saul E. White on September 19, which attempted to comfort American Jews by explaining to them why the antisemitism that had manifested in Europe could never take root in the United States. He argued that (1) the U.S. lacked respected antisemitic writers or historians that could influence the nation’s thinking; (2) no political party espoused antisemitism as part of their platform; (3) there was no repressed minority seeking a scapegoat for problems because the Roosevelt administration had rescued the economy; (4) no churches were sympathetic to antisemitism; and (5) the U. S. was built on religious freedom and racial tolerance.

Meanwhile, newspapers and radio broadcasts carried the vitriolic antisemitic messages of Father Charles Coughlin who defended Nazi violence against Jews and gave a platform to Charles Lindbergh who blamed Jews for conspiring to bring the U.S. into the war. Many members of the U.S. State Department and several  congressman worked to block Jewish refugees from seeking safety in the United States. Respected organizations such as the American Legion actively worked to keep Jewish refugees out, even children. African Americans struggled for basic civil rights, while the U.S. government would soon begin imprisoning its own citizens of Japanese descent in concentration camps.

Rabbi White encouraged his readers not to worry and even chided Jewish activists who combatted antisemitism with education, as well as those who shared reports of the tragedies occurring in Europe with increasing regularity. Rabbi White sarcastically rebuked those Jewish activists who “have turned amateur detectives and go about with an air of knowing it all and occasionally hint at a threatening calamity.” Rabbi White would later become an important force in fighting antisemitism and an active participant in the civil rights movement. However, it is clear from his 1941 column that despite the extensive coverage in newspapers, many American Jewish newspaper readers had no idea that the “threatening calamity” had already arrived.

On September 21, the South Bend Tribune ran a UP story showing that a glimmer of humanity remained in Berlin. The UP reported that a silent protest had broke out in response to “the new rigid anti-Jewish laws” requiring Jews to wear the star badge. According to the article, non-Jewish Germans “were seen on the streets of Berlin today approaching Jewish acquaintances and ostentatiously shaking hands with them.” This expression of solidarity was “an obvious gesture of sympathy.”

According to the USHMM:

This response was widespread enough that the Ministry of Propaganda and Enlightenment felt compelled to issue pamphlets instructing Germans on how they should respond when encountering neighbors wearing the yellow star.

The Nazi propaganda machine also responded to criticism of the new restrictions with false reports blaming the United States for the new law. These manufactured stories were especially well-covered in Indiana newspapers through AP and UP reports and dispatches received directly from war correspondents. On September 26, the Indianapolis News, Kokomo Tribune, (Richmond) Palladium-Item, South Bend Tribune, and the (Columbus) Republic all reported on the propaganda reports, sometimes on their front pages. The AP relayed reports from Americans in Berlin of “a story going the rounds of the German capital that every German national in the United States has been compelled to wear the swastika, leading to orders that Jews in Germany must wear a yellow Star of David on their left breasts.” American newspaper offices reported that they were receiving “frequent inquiries as to whether the rumor is based on fact” and Americans in Berlin were trying to dispel the rumor as nonsense. Of course, it wasn’t nonsense, it was propaganda. However, the AP reported, “Official [Reich] press officers said the government had nothing to do with the story and insisted they knew nothing about it.” Nonetheless, it was working. According to an AP story published by the Richmond Palladium, the average Berliner believed the rumor. The AP reported, “Whoever launched this whispering campaign a few days ago did a good job of it. It is all over Berlin and people are repeating it everywhere.”

By October, the (Indianapolis) Jewish Post published a report from the Jewish Telegraphic Agency (JTA) that German authorities were increasing their antisemitic propaganda output. The JTA wrote that “the Nazi press throughout the Reich is conducting violent anti-Jewish propaganda to back up Hitler’s manifesto to his army that ‘the Jews and only Jews’ are to be blamed for the German soldiers killed on the Eastern front.” However, the JTA also reported that the enforcement of the star badge was having as unintended effect. The article stated:

The change of mood among the German people towards the Jews is reported to be the result of the introduction of the yellow Mogen David [Shield of David] for the Jews in the Reich. This anti-Jewish measure has, according to the report, had an opposite effect than that desired. It has provoked sympathy for the Jews instead of hatred.

According to the report, Christian ministers were especially given pause, pondering publicly: “Who knows? We Christians might soon find ourselves wearing the cross where Jews now wear the yellow star.” This reflection resembles the famous quotation by Martin Niemöller which is part of the USHMM’s permanent exhibition:

On October 3, 1941, the (Indianapolis) Jewish Post shared a report from Amsterdam via Stockholm, that “Nazi authorities in Holland have issued an order compelling all Jews there to wear a yellow Star of David over their heart” and that the accompanying  restrictions imposed on Jews in Germany prohibiting travel and instilling a curfew would also apply in Holland.

The Nazi propaganda machine was at work in Holland as well. German occupying authorities ordered the showing of the 1940 film The Eternal Jew, a horribly antisemitic piece of Nazi propaganda and a pet project of Joseph Goebbels. But also at work was a quiet resistance. The (Indianapolis) Jewish Post reported:

Demonstrating their contempt for the anti-Jewish propaganda which the Nazis are conducting in the Netherlands, crowds of Hollanders flock to the theaters where the Nazi anti-Jewish film “The Eternal Jew” is being shown under orders from Berlin, and sit through the entire performance with their backs to the screen.

According to the USHMM, the badge was systematically enforced throughout Belgium and the Netherlands by the spring of 1942 and in occupied France by June. In each place the badge was introduced, deportations to ghettos and then killing centers soon followed. The badge was only a piece of cloth. But the intent was to mark Jews as different, less than human, and designate them for deportation and murder. The Nazi imposition of the star badge serves as a reminder that we must confront antisemitism and other forms of hate on contact. According to the USHMM:

More than 70 years after the Holocaust, the horrors of Rwanda, Srebrenica, and Darfur are sobering reminders that preventing future genocides and mass atrocities remains an enormous challenge. Yet genocide is not the inevitable result of ancient hatreds or irrational leaders. As we learn more about the risk factors, warning signs, and triggering events that have led to it in the past, we are also learning ways to prevent it in the future.

The USHMM website has tools for preventing genocide and confronting hate and antisemitism today, including the Early Warning Project: https://earlywarningproject.ushmm.org/

*Note: Researchers for the History Unfolded project found no Indiana newspaper coverage on the imposition of the star badge in the Hancock Democrat or in the Greenfield Daily Reporter.

**Note: For more on the U.S. and Hoosier response to Jewish refugees seeking asylum, see past posts: