See Part I to learn about the unparalleled professional accomplishments of Dr. Helene Knabe.

Officials followed a variety of leads regarding the gruesome crime. The first person on the list, suspiciously, was an African American janitor named Jefferson Haynes, who lived below her. Second on the list was a Greek prince who was seen mailing a letter near her apartment. This absurd line of inquiry continued for months by the very people who should or could have advanced the case more quickly. Police Chief Martin Hyland reasoned that she committed suicide because at 5’6″ and 150 pounds, he believed her strong enough to ward off any attack or to take her own life. 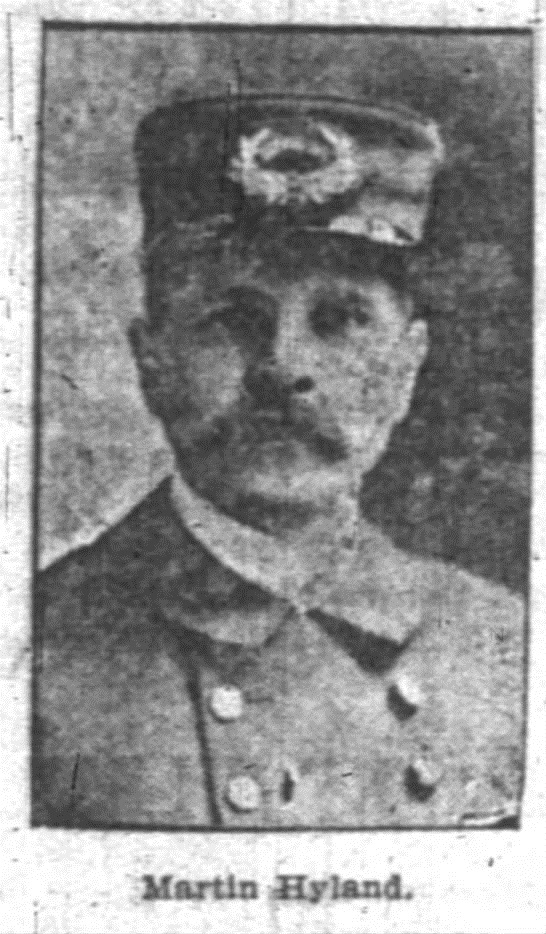 Also problematic, evidence was left in a room where anyone could access it. Although fingerprinting was in its infancy, officials ignored a bloody fingerprint, despite Dr. Knabe having no blood on her hands. Police and some physicians believed despondency over her unproven sexual preference or financial situation caused her to take her own life. Even Detective William Burns, known as America’s Sherlock Holmes, publicly stated that based solely on the evidence in the newspapers, he believed she killed herself.

Local, state, national, and even some international press ran stories about Dr. Knabe. Indianapolis newspapers were surprisingly fair in their coverage and published editorial and opinion pieces that were overwhelmingly complementary of Dr. Knabe and her professional achievements. Although these newspapers interviewed people who believed Dr. Knabe got what she deserved, they did not give these sentiments undue attention or sensationalize them. 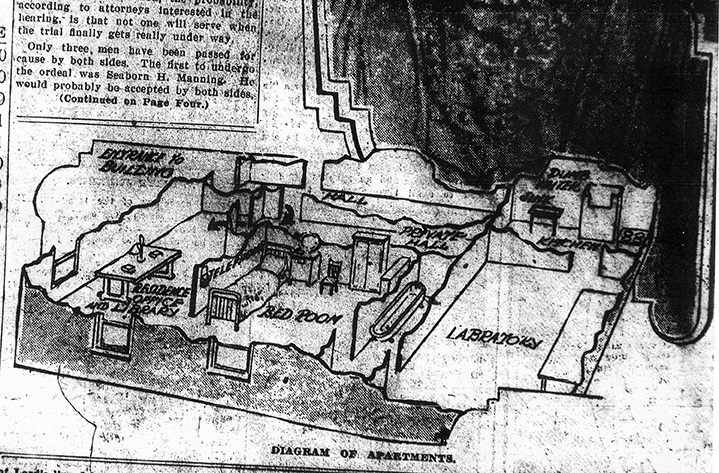 Thankfully, the coroner, Dr. Charles O. Durham, determined that Dr. Knabe was murdered. Dr. Durham noted she had defense wounds on her arms and he was adamant that she could not have made both cuts. He also noted several factors he considered “strongly presumptive of murder,” including the position of the hands, which had been closed after death; the absence of a plausible suicide weapon; and the fact that many witnesses had seen a man that night around the apartment building.  Dr. Durham’s findings negated rumors regarding Dr. Knabe’s sexuality and finances, which police felt could have contributed to her death by her own hand.

In response to Dr. Durham’s findings, female doctors who were Dr. Knabe’s friends actively tried to help find her killer. They hired private investigator Detective Harry Webster at their own expense, through donations, and at the detective’s own expense. Almost fifteen months after her death, two men were indicted by a grand jury, based on Detective Webster’s findings. The prosecution believed that Dr. William B. Craig was engaged to Dr. Knabe, a fact he vehemently denied, and that he wanted out of the relationship. As Dean of Students, lecturer, and financial stakeholder in the Indiana Veterinary College, he would have been very familiar will zoology and the “sheep’s cut,” which is the type reported to have killed her.

Dr. Craig met Dr. Knabe in 1905 and maintained a friendship, at the very least. He recommended her for the position as Chair of Hematology and Parasitology in 1909 at the veterinary college. Shortly before her death, Dr. Craig and Dr. Knabe seemed to be in the middle of an ongoing dispute. Dr. Knabe went to the IVC to see about changing her lecture time with Dr. Craig so that she could attend her course at the Normal College. Dr. Craig became enraged when a colleague asked for his answer and he said “Oh, f—! Tell her to go to hell!” and he stormed out of the room. The night before Dr. Knabe died, Dr. Craig’s housekeeper overheard them arguing and she heard Dr. Knabe say, “But you can continue to practice and so can I!” Police had a letter in their possession in which Dr. Knabe told a friend she was getting married. Dr. Knabe confided to a friend she was getting married to a man with an “ungovernable temper.” At the time of her death, Dr. Knabe, an accomplished seamstress and dressmaker, commissioned a costly dress, indicative that she was getting married. 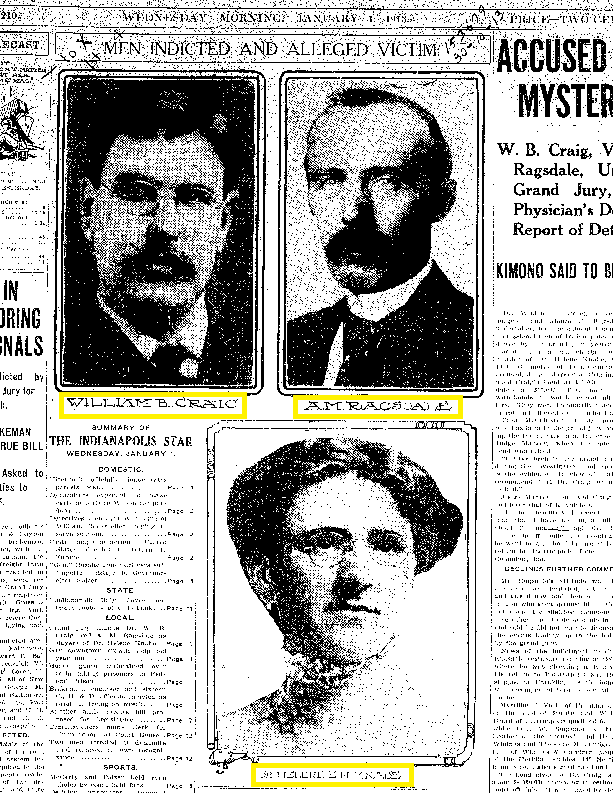 The second man indicted, Alonzo M. Ragsdale, was an undertaker and Dr. Knabe’s business associate. Dr. Knabe often joked with Ragsdale that when she died, she would be sure to give him her business. And so she did. Augusta appointed Ragsdale undertaker and estate executor. He was accused of concealing evidence against Dr. Craig in the form of the kimono Dr. Knabe was wearing at the time of her death. It was said he had laundered it in an effort to rid it of blood stains.

In the words of Ms. Frances Lee Watson, Clinical Professor of Law at IUPUI, “She was screwed from day one.” Dr. Knabe was never treated as a victim; she was treated as a villain. Society in general could not understand a woman wanting to work in a field that was sometimes unpleasant and coarse. In the media and by some of her peers, Dr. Knabe was chastised for being assertive in her career and pursuing her dreams. Her character was summarily attacked because she expected equality with her peers, male or female. Because she was a 35-year-old woman, who was a physician living in a small apartment—rather than a grand home with a husband and children—Dr. Knabe was automatically judged unhappy. Due to Alonzo Ragsdale, who in addition to being indicted was also an unscrupulous estate executor, the public believed her to be an unsuccessful, pauper physician.

The truth was Dr. Knabe had many revenue streams from jobs that she loved: practitioner, instructor, and artist. She planned to continue her work and make herself even more financially stable. By looking at her financial records, Dr. Charles Durham proved that she was financially sound, bringing in over $150 per month. The public did not know for many months that Dr. Knabe chose to send most of her disposable income back to her uncle because he was no longer able to work. 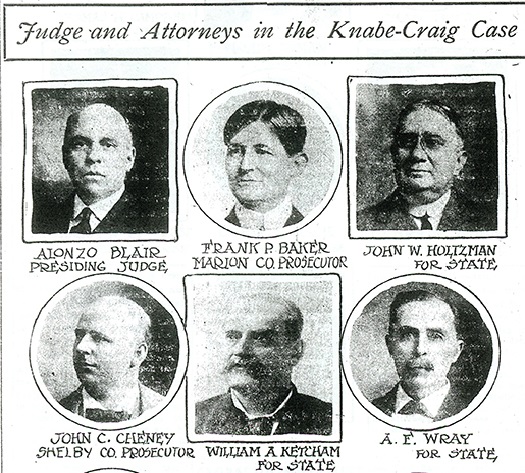 None of these facts mattered. The defense attacked Dr. Knabe’s personal character in the courtroom, claiming she was an aggressive and masculine woman. The character witnesses, who sought to discredit Dr. Craig, suddenly moved out of state or could not be found. A key witness who positively identified Dr. Craig changed his story, and Dr. Craig’s own housekeeper, who had signed an affidavit stating she saw him return late and leave early with a bundle of clothes the night Dr. Knabe died, refused to come to the courthouse.

Consequently, the state’s case fell apart and after nine days the prosecution could not make a connection between Dr. Craig and the evidence. In an unusual move, the judge stepped in as the thirteenth juror and instructed the jury to acquit Dr. Craig. Normally a judge provided this instruction only when a technical error was committed, which was not the situation in this trial. He did rule that the prosecution had proven Dr. Knabe had been murdered, but that they had no real evidence against Dr. Craig.

Because there was now nothing to be an accessory to, the charges against Ragsdale were dropped. No one was ever convicted of Dr. Knabe’s murder. Oddly enough after the trial, Ragsdale declared Dr. Knabe’s estate insolvent without collecting all debts. Many of her personal items did not sell and their whereabouts were undocumented. The probate records submitted over three years to the courts contained erroneous calculations that went unnoticed and several hundred dollars were not reconciled. 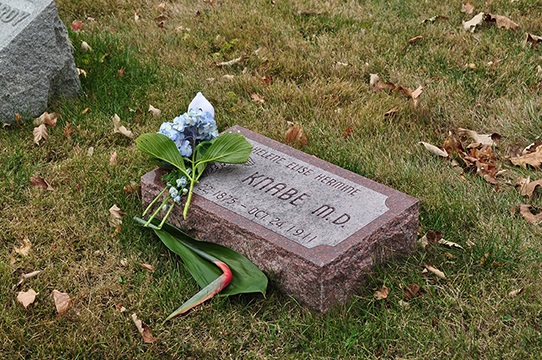 Dr. Knabe was buried in an unmarked grave at Crown Hill. Over the years, newspapers have revisited her case, but in 1977 her case file was destroyed in a flood.  Unfortunately, the sensationalizing of Dr. Knabe’s death has obscured her legacy as a tenacious, committed, and savvy physician in a field dominated by men.